BMW is not a charity …

by Sir Alex (self anointed) | 2 comments 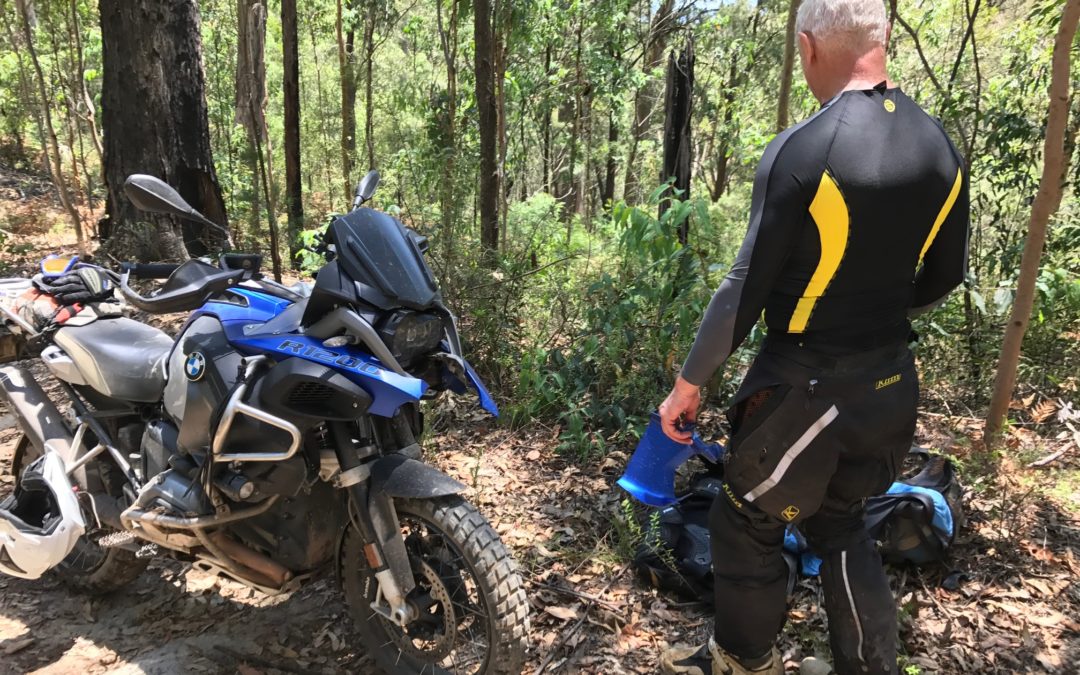 Those who ride BMW R1200GS/As might be interested in the links below.  They lead to aftermarket gear levers that are priced at just 80USD.  I believe that’s considerably less than BMW and Touratech.

Below is a picture of my darling girl after she took an unauthorised meander, from what I thought was our mutually agreed chosen path, in order to have an intimate encounter with an example of nature of the arboreal kind.

As you probably know, trees tend to have, what I consider to be, an unreasonably proprietorial attitude about their “personal space”.  Call me unAustralian, but, I find eucalypts are particularly bloody-minded to the point of being decidedly undemocratic, but, let’s not make this tragic tale any worse by getting into a heated political debate.

Sadly, my baby’s injuries are probably worse than they look, as the headlight’s been shifted off its mount and Christ knows what sort of injury she’s done to her internal organs and skeletal structure.  Soft tissue damage appears to be minimal, so thank you, God, for that little gem of good fortune.

It’s not a complete disaster, though.  My stoic little sweetie’s eyes still light up when I push her buttons and she’s feeling frisky enough to go for another rodeo, although, future expeditions will need to be restricted to daylight hours as the Ol’ Girl’s a tad cross-eyed.  Unfortunately, it would appear that her full beauty will not be restored without a visit to the emergency ward where she’ll probably be admitted as an  inpatient, at great cost, as I she doesn’t have private health cover.

Shares
I tell ya, my girl has no idea how lucky she is to have someone who’s such a big “giver” as yours truly.  I know it’s often said that it’s better to give than receive, and I agree (a tad begrudgingly, perhaps), however, I am finding my propensity for largesse is wearing a tad thin.
My accountant reckons it’s wearing very thin!  In fact, he never fails to expresses amazement at how few splinters I have under my fingernails given all the scratch marks that he says are so deeply etched into my barrel’s bottom.  He seems to think he’s a barrel of laughs.  I do too, it’s just that his level of humorous content is on par with that of my barrel of abundance and his sick-puppy mind has him scraping his blackboard-lined barrel bottom with long finger nails.  Talk about shivers up the spine!
And there’s no stopping my accountant when he’s on a roll!  He invariably goes on to tell me that “barrel” is a little generous when it comes to metaphors of my financial liquidity.  “Bucket” is the more appropriate term, apparently, and it’s a small one at that.  Not to go into too much detail (I don’t want to bore you), but he says that my little reservoir of riches is smaller than the brightly coloured toy-store unit that might be found dangling from the pudgy pale hand of a young, minimally dressed, enthusiastic Australian beach-based construction worker who extracts nauseating levels of job satisfaction from building classic style accommodation complexes along the medieval architectural lines that would induce horrendous flashbacks in Rapunzel’s pretty little head.  Rapunzel being the dishy blonde who was probably scarred for life after spending all that time in the witch’s “penthouse”.   Just imagine how distressed she must have been after spending all those years in solitary confinement!  But worst then that, immediately prior to heading out on her very first date ever, she had to cut off all that beautiful, long blonde hair using nothing but a rough pair of scissors!  I’d have been ropable!  I hope she emptied out the mini-bar, at least.
I know this might be off-topic, but, can I just say that I’ve always been a tad skeptical about the “happy ending” in this tale.  There’s never any mention of the fact that ‘Zellie (or even just “‘Zel”, to her good mates) was forever doomed to a life of hair extensions.  I just hope the Prince was worth it.  These days, I’m a bit of a “new-ager” and am of the opinion that some femmos might have had one or two legitimate points with regards to society’s attitude to women.  I even pay heed to the commie lezzos at my local guzzling trough who regularly inform me of their strong desire to ‘change my sexual status to transgender’ when I inquire, on a similarly regular basis, if their “outfits” are genuine Italian vinyl.  I really shouldn’t embark on such high-risk interactions, given my fertility status.  After all the motorcycle “stunts” I’ve pulled, I’m down to my last two testes!

Shares
But, to return to the sad story at hand: what makes my tragedy so ironic is that immediately prior to heading off on the day’s hoon, I told Jörg, who is of more sensible Saxon and Teutonic stock than my clownish Celtic ancestry, that I was going to take it a little easier to reduce risk of just such an incident (I’m not above accepting some responsibility for what happened).  Being an unemployed bum, I need to watch the bickies if I want to avoid a gutter-based lifestyle in the not so distant future.  Turns out, though, I had lied to my fellow hoonster and rode like an idiot male (some women might suggest that this term is a tautology.  I respectfully suggest they keep their thoughts to themselves, given the hurt that such truths impart upon my sensitive soul).  You see, I am one who prides himself as having a greater degree of integrity than JC himself (assuming he didn’t fake his own death), and yet I’d just told a great big fib!  Ironic, eh.
I should point out that Jörg’s more sensible lineage does not prevent him from enjoying a good laugh at my “stunts”.  He’s undoubtedly a great bloke, but, I can’t help feeling that he could show just a little more compassion, understanding, or sympathy.  Improvements in all three traits would be highly appreciated, but, let’s keep it real.  At the very least, you’d think he could stop pissing himself over my misfortunes by the time I come round from the general anaesthetic.  To Jörg’s credit, though, he always manages to lift my spirits, even though it aggravates his aching ribs to talk.  The first thing he invariably says after I awaken from the induced coma and he’s finished off all the chocolates and confirmed the contact details of the attending nurse(s), is how much more he’s enjoying his time in Australia since we met.
It’s effective because it’s sincere!
By the way, credit for the photo above also goes to Jörg.  He took the picture as I was a tad preoccupied with embarking on the very important process of grieving.  After so many similar tragedies, I have learnt that sorrow and sadness at the loss of loved ones, i.e. vast numbers of large denomination monetary notes, really IS a process.  So if nothing else, please take heart from my experience and be assured that the good life does return after a tragic loss.  It might take a few years, however, I find the mourning period can be substantially reduced by opening your heart and adopting a new baby BMW.
Of course, the adoption process will require opening your wallet and sacrificing the entire crop that might have fed all of the millennium’s future generations of moths.  For alas, it is a harsh world, and if one is to achieve true happiness, one must accept that BMW is not a charity.
Be that as it may and call me a cock-eyed optimist, but I like to think of the charity status of commercial entities as an “alternative fact”, so the first question I usually put to the BMW sales rep is, “Do you have any bikes going for free?”.  To be honest, though, that’s more an opening gambit to my bartering strategy.

Shares
So anyway, you might have gathered that it was a while before I could continue the ride, however, it wasn’t entirely due to my grief.  Call me superficial (it’d make a nice change), but, I was a tad reluctant to be seen with my now scarred and not-so-beautiful girlfriend.  You know how it is.
On the plus side, and somewhat remarkably, I came out of this incident uninjured.  Being a hoon of Spartan fortitude, I didn’t even drop the girl (although, I’m reviewing my options as I type, and could very well drop her for a shiny new “young thing”).  Despite this, somehow she managed to bend her gear lever; hence the reason I stumbled on the above items.
And, the other player in this sad tale; the tree?  It was one of those OTT types that staunchly hold their ground (Eucalyptus Zealous, I think) and I can assure you, that the iron-barked bugger did not fail to fulfil its charter.  It carries only a minor scar that I am sure is not of a permanent nature and is unlikely to deemed repulsive to bees and deter them from fulfilling their reproductive responsibilities – they would appear to have a greater depth of character than me.  Being a bit of a greenie, I worry about these things.
Anyhow, I just wanted to explain how I came upon the above links.  I don’t what you to think I whittle away my time on frivilous acitivities such as randomly searching the web for spare motorcycle parts.
I’ll let you get on with your life.  It IS the least I can do .
Cheers, Alex