by Sir Alex (self anointed) | 2 comments 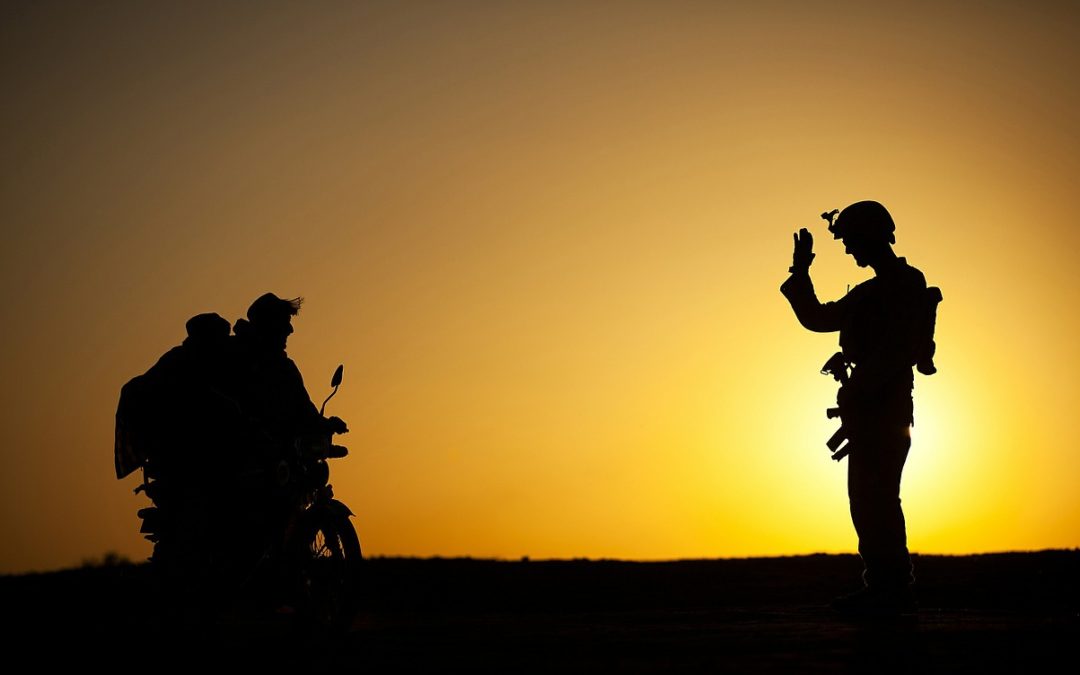 An encounter with Australia’s own Rambo

My fellow adventurer, Joerg, and I, had an interesting incident recently, while on a ride, that provided us with a new experience involving a firearm.

It was just the two us out on a glorious Sunday morning, fulfilling our spiritual needs with one of our regular off-road sojourns into the wilds, rather than observing the more traditional practice of attending church.  With our souls spilling over with the joys of life on a five-hour mission to explore new worlds, we came upon a gate that clearly bordered a private property.

Unsure if we had right of way – the gate was unlocked and had no signage to indicate the owner’s philosophical outlook on trespassing – we hesitantly rode across the boundary into “one-man’s land”.  We immediately spotted the likely landlord going about his business of burning off the many trees he had recently felled in the race to achieve global balding before the Greens got up in the coming election.

As we pulled up to him, the industrious hobbit figure went to the back of his ute, and following right-wing best-practice guidelines, pulled out a loaded rifle.  Never had a gun drawn on me before, although I might have been in the sights of an ex-gf or two, possibly even an uncredited creditor of dodgy repute.

However, his primary concern was not to assert his aversion to having strangers on his land; he’d sprung into Rambo mode as an act of self-defence.  His fear was that our intent might be that of raping and pillaging.  After a short discourse, we managed to assure him that we came in peace (I might add pipe & tobacco to the trusty tool kit).  The last thing on my mind, at least (I can’t speak for my fellow intrepid frontiersman of Saxon and Gothic heritage), was R&P.

In an exemplary display of subtle diplomacy, which appeared to go unnoticed and unappreciated by Joerg, I refrained from explaining to the sexy beast, that as a rule, balding middle-aged men with pot bellies, missing teeth, and attired in a filthy T-shirt don’t usually inflame my latent, visceral Viking-tinged Celtic urge of primal lust-filled rage to have non-consensual anal intercourse.  Besides, neither of us was packing prophylactics with a use-by date set in the future.  Relieved as he might have been by this news, I thought there was a risk of undermining his self-esteem and there’s nothing more dangerous than an armed Charlton Heston fan who’s just lost all reason to live.  Nor did I make any inquiries into his preferred stringed instrument.  Unlike Burt Reynolds, I’ve had very limited experience in dealing with such delicate personal matters.

As far as plundering goes; upon reflection, I reckon that two octopus straps and a small cargo net would have been insufficient for securing a wide-screen TV and a two-door fridge on the back of a KTM 690cc, sans racks and panniers.  And, I’m sure it would have torn the stitching of my brand new Camel backpack if I had tried to carry such items on my person, despite its impressive 35 litre capacity.

Might I add, that if I had grabbed the white goods, I hope I would have offered Joerg all the furniture, because that’s the kind of generously spirited bloke I aspire to be.  Besides, Joerg is one of regular acts of grand largesse and I am sure he has accumulated a large amount of credit on the Great Cosmic Equaliser’s ledger.  Of course, once I’d finished with the ransacking, I would have set the entire property ablaze, because my mantra is “you’ve got to be cruel to be kind”.  Some might preface that with “sometimes”, others not.  I believe in consistency, so I’m more of your “always” kind of guy.  That’s just the way a roll.

So, to return from that bit of needless, pointless, and painfully tedious conjecture and back to the story at hand which has me acting as amabassador extraordinaire in the face of a very real and present danger:  Instead of inflaming the situation with an impressive display of foot-in-mouth, I bit my tongue in what was, for me, a remarkable act of self-discipline. I figured he had the edge on us, armed as he was with a loaded high-powered rifle, complete with telescopic sight (with night vision capabilities), versus our Leathermans and tyre levers that were tucked securely, but somewhat inconveniently, in their respective tool kit.

It all ended well, you’ll be pleased to know.  Reconciled, our former antagonist even invited us to imbibe in a round of vintage metho (Chateau Shellharbour), which we politely declined.  I’m not a big fan of the more volatile spirits, not even the high-end stuff, and Joerg, a smoker, felt that the risk of self-immolation was just a tad too high and wittily remarked, “I wouldn’t want to inflame the situation.”  With that, we all fell about in great fits of laughter.

Such was our mirth that hours later, Joerg and I were still struggling to mount our bikes.  The scene came to end, as all good things must, with us riding off into the smoke-hazed sunset, barely in control of our powerful Austrian steeds. I reckon we could easily have had a nasty accident if our environmentally aware new BFF hadn’t so thoroughly denuded the landscape of trees.  I had to concede, the plucky primate was NOT one of society’s “leaners”.